From Sol to Istanbul, through the whole world. Libertas Magazine 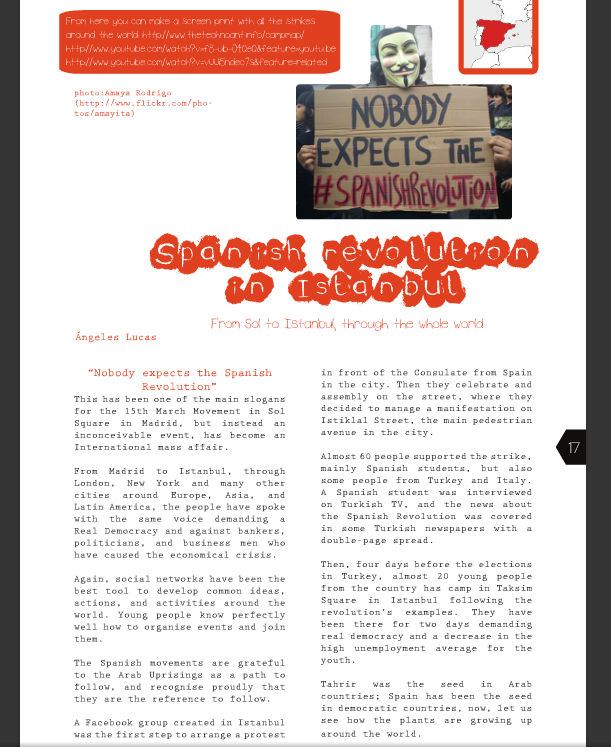 “Nobody expects the Spanish Revolution” This has been one of the main slogans for the 15th March Movement in Sol Square in Madrid, but instead an inconceivable event, has become an International mass affair.

From Madrid to Istanbul, through London, New York and many other cities around Europe, Asia, and Latin America, the people have spoke with the same voice demanding a Real Democracy and against bankers, politicians, and business men who have caused the economical crisis.

Again, social networks have been the best tool to develop common ideas, actions, and activities around the world. Young people know perfectly well how to organise events and join them.

The Spanish movements are grateful to the Arab Uprisings as a path to follow, and recognise proudly that they are the reference to follow.

A Facebook group created in Istanbul was the first step to arrange a protest in front of the Consulate from Spain in the city. Then they celebrate and assembly on the street, where they decided to manage a manifestation on Istiklal Street, the main pedestrian avenue in the city.

Almost 60 people supported the strike, mainly Spanish students, but also some people from Turkey and Italy. A Spanish student was interviewed on Turkish TV, and the news about the Spanish Revolution was covered in some Turkish newspapers with a double-page spread.

Then, four days before the elections in Turkey, almost 20 young people from the country has camp in Taksim Square in Istanbul following the revolution’s examples. They have been there for two days demanding real democracy and a decrease in the high unemployment average for the youth.

Tahrir was the seed in Arab countries; Spain has been the seed in democratic countries, now, let us see how the plants are growing up around the world.